The Jaguar MKII monocoque body shell is a complex rust trap, so extensive checks are needed.  The key areas you should look at will be the floor pan, the inner and the outer sills, the wheel arches, also check the bottoms of the doors, and of course the wings.

The wings are very expensive if you need to replace them, so please don’t dismiss early signs of corrosion. Pay very close attention to door alignment, this can normally reveal far more serious issues with the body shell.

Take plenty of time checking the underneath the car, inspect closely the chassis box sections, and also the legs of the chassis and the front cross member, particularly so the ‘crow’s feet’ at each end, which if you look are connected directly to the Jaguar`s front valance and the cross member.

The suspension mounts as well as the jacking points, need careful inspection and don`t forget the area around the spare wheel well.

The most popular Jaguar MKII engine is the very familiar 3.8 litre XK engine. Any excessive smoke emitted from the exhaust shouldn`t be a sign of any major problems, as this could be caused by a blockage in the pipework of the engine breather system.

You`d do well to check there first before thinking the worst. A common problem is leaks from around the crankshaft rear main oil seal, while any rattle from the area at the front of the engine, might well be a signs of an impending timing-chain replacement, in itself a costly and tricky job.

But low oil pressure often could affect the performance, and operation of the timing chain hydraulic tensioner, which leads to very poor adjustment; so make sure that the oil pressure gauge shows around 50psi when the engine is cold, and at 40psi at the engines normal operating / working temperature.

Second hand Jaguar Mk11 parts will substantially reduce the costs, so look around. But a complete set of the wood trims can be found for less than £2000, no doubt though it would involve a very lengthy search.

Check all the electrics work thoroughly, and ensure that the dials are all working well. Lots of cars have actually been converted over time to an alternator setup, so it will be a bonus if it`s already been done.

The Moss 4-speed manual with overdrive gearbox is a wee bit heavy, and a bit slow in its operation, but apart from a worn synchro-mesh, its otherwise very reliable. The later version full synchro Jaguar gearbox, is much smoother.

Now, replacing worn clutches, will mean that the engine has to be removed – not a cheap or easy fix, – so do check it very carefully on your test drive. Something like a failed master, or even a slave cylinder can cause clutch problems.

The whole suspension system on the Jaguar Mk2 is quite simple. Any knocking at the front of the car could indicate a broken coil spring.

The ride ought to be comfortable, but nice and taut, so if there` any sloppiness, it could mean an overhaul might be due. Replacing the road springs and dampers isn’t that difficult, but the cost can soon mount up.

The Dunlop disc brakes were in fact standard equipment on the Jaguar Mk2, and they provide very decent stopping-power if every thing is healthy. The brakes will seize on very little used examples, and a weak hand brake isn’t that uncommon.

A defective brake servo, will be very apparent on your test drive, so a very thorough check of all brake lines for any signs of any corrosion, is a very sensible precaution. Jaguar replacement brake parts are quite reasonably priced, so if the system is in need of an overhaul, it shouldn’t break the bank.

Check for any movement in, and around the steering column, this could mean that the bushes might need replacing soon. Fitment of power-steering, was actually an option and a very popular one too. If Jaguar wire wheels are fitted, do check for any wear at the spokes and the splines, as a professional refurbishment will be very costly. 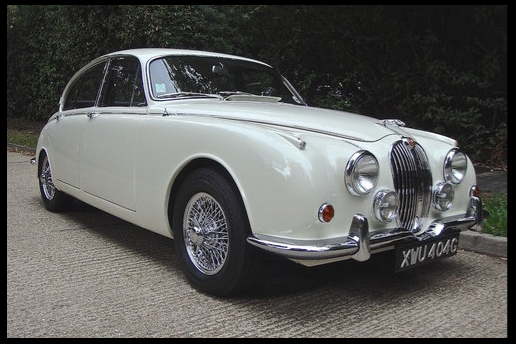